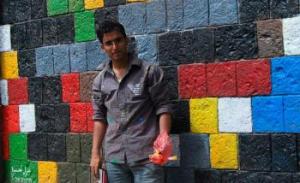 On a street in Sana’a, Morad Sobea, 24, is painting on the bullet-ridden walls, ignoring the derogatory remarks of many passers-by.

Three weeks ago, Sobea decided to start painting graffiti near the Kentucky Roundabout in Sana’a. Under the scorching sun, he expresses himself through creating art on walls.

“Yemenis need beautiful scenes because they’ve been disappointed by political life,” he told the Yemen Times while he sketched enthusiastically.

“Graffiti is very important for Yemenis because it helps them forget violence and political disputes. It also attracts people’s eyes and makes them more comfortable,” he said.

When he started Sobea faced many difficulties and challenges, but he persisted. “Some people insulted me and described me as insane, while others asked me about my aims in an annoying way.”

Sobea hopes that most walls on the streets of Sana’a will fill with graffiti, describing the streets as bleak and sad.

“This art breathes life into my soul,” he said.

Sobea aspires to widen his activity into other districts in Sana’a and into other governorates. “I will seriously attempt to spread this kind of art among Yemenis, and replace the scenes of damage with colors and beauty,” he said.

Sobea has been creating art since 2001. He is also interested in sports and has competed in various judo and taekwondo championships, earning himself a black belt.