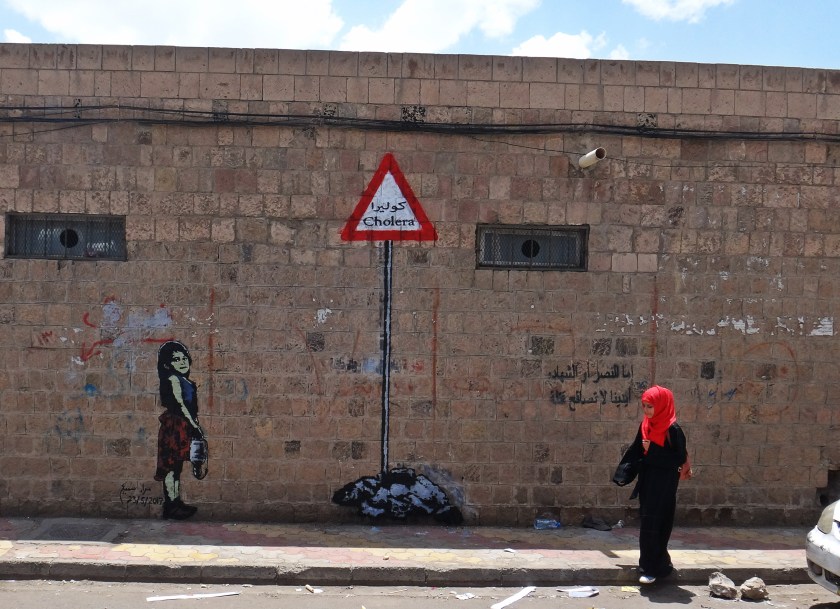 END_OF_DOCUMENT_TOKEN_TO_BE_REPLACED

جدارية “كوليرا”:
يموت اليمنيون الف مرة،، ولا أحد يكترث. لا أطراف الصراع، ولا المجتمع الدولي ولم نعد حتى نحن نكترث بأنفسنا. كم هو مشين أن يموت الناس هنا من مرض تافه تم القضاء عليه في معظم بلدان العالم ومنها اليمن. الاشنع من هذا انه كان بإمكان تفادي إنتشار المرض بسهولة وباقل الجهود، ولكن عدم الإكتراث بحياة اليمنيين يؤدي كل يوم إلى تزايد مرعب في عدد ضحايا الكوليرا. كم هو صعب أن تكون يمني في هذا الوقت، وكم هو أصعب أن تكون طفلاً لا يعرف سوى الف مفردة للموت.
جداريتي “كوليرا” على جدار مستشفى الجمهوري، ضمن #حملة_حطام، 23 مايو 2017.
“Cholera” Mural:
Yemenis die a thousand times, and no one cares! Not the parties of the conflict, nor the international community and even we no longer care about ourselves. It is outrageous that people here die from a trivial disease that has been eliminated in most countries of the world, including Yemen. What is more gruesome is that it was possible to avoid the spread of the disease easily and with minimal efforts, but the lack of attention to the lives of Yemenis leads every day to an alarming increase in the number of victims of cholera. It’s difficult to be a Yemeni at this time, and even more difficult to be a Yemeni child who grow up knowing only a thousand meanings of death.
My mural “Cholera” on the wall of al-Jamhouri Hospital in Sana’a, within #Ruins_campaign, May 23, 2017.

Houses of Death – Artist Thi Yazan al-Alawi:
“The Yemeni home is devastated by the war and it has been turned into wreckage; in every Yemeni home, there are victims of war, hunger, and/or disease. The Cholera epidemic is one of the most dangerous roads that a society can take because it destroys the remaining survivors of the war. Yemenis want a quick solution to their crisis. They want to live in harmony and tranquility in their homes. While war kills many innocent people in Yemen, Cholera kills the rest.” says artist Thi Yazan al-Alawi after painting his mural “Houses of Death” on the wall of al-Jamhouri Hospital in Sana’a, within #Ruins_campaign, May 23, 2017.

When Murad Subay takes a walk in his city of Sana’a in Yemen, he witnesses scenes that he didn’t see two years ago:

There’s trash everywhere. The roads, even the main streets, are full of holes, some completely without asphalt. Passersby look sad and cautious.

Many don’t have access to clean water or enough to eat. Some beg for food, while others are too proud to ask. Instead, they go out at the end of the night, looking for leftovers in the trash.

“Before the war, people would go to gardens, recreational parks and take walks,” Subay, 29, told ABC News. “Now, they mostly stay in their homes and try to live.”

Subay, an artist originally from Dhamar, Yemen, moved to the capital Sana’a with his family in 1993. He now uses the walls of the city to paint about the 18-month-old war there.

Yemen is one of the world’s poorest countries and the war has made conditions much worse: The United Nations estimates that half the population — more than 12 million people — are in need of humanitarian assistance.

In June 2014, armed conflict between the government and militias spread across the country. Later that year, Houthi fighters, supported by former President Ali Abdullah Saleh forces, drove their way into Sana’a and, little by little, took over government institutions during the early months of 2015.

Interim President Abdrabbuh Mansour Hadi and his government fled the country. An Arab coalition of nine countries led by Saudi Arabia then initiated a military campaign to restore Hadi’s government to power.

Even before this conflict, Yemen had one of the highest rates of malnutrition in the world. The Rome-based World Food Programme is increasingly concerned about the lack of food and the growing rates of child malnutrition in Yemen.

In some areas like Hodeidah governorate, Global Acute Malnutrition rates have been recorded as high as 31 percent among children younger than 5, more than double the emergency threshold of 15 percent.

Almost half the children countrywide are irreversibly stunted, the World Food Programme says. Basic services across the country are on the verge of collapse. Chronic drug shortages, unpaid salaries and overall destruction restrict around 14 million Yemenis, including 8.3 million children, from accessing health care services, according to the World Bank.

In his art campaign, “Ruins,” started in May 2015, Subay paints about some of the country’s problems. He painted on walls last week with his friends under the theme “death by hunger and disease.” An emancipated child in a casket was among the motives.

“There’s hunger, so much hunger,” Subay said. “People wait in line for water. Cholera was a disease of the 19th century but now we have people suffering from cholera in Yemen in the 21st century.”

When he was younger, Subay used to paint and draw at home. But that changed with the Arab Spring in 2011.

“We chanted for civil rights and for justice in the squares. People from every region of Yemen were there,” Subay said.

He decided to move his art out in the public and started painting with others on walls. During the first campaign in 2012, he and fellow artists painted portraits of more than 100 people who’ve disappeared.

Since then, he has painted about civilian deaths, destroyed homes, life under siege and restrictions on freedom of speech. Subay says there are only a few newspapers left in Yemen and that they all represent the same voice.

Subay’s brother Nabil, a journalist, was shot in both legs by unknown perpetrators after he wrote critically about the war. He is now being treated in Cairo.

The parties of the conflict have also occasionally interrogated Subay and prevented him from painting in certain places. But that has never stopped him from initiating new campaigns.

“When you are doing the right thing, you should not fear anybody,” Subay, whose wife studies at Stanford University in California, said.

Financial struggles, however, prevent him from painting as often as he would prefer. Like many other Yemenis in the Arabic-speaking country, Subay doesn’t have a salary.

“I can’t paint like before,” he said. “Materials are expensive, so I only paint every two months. Before, I would paint something every two weeks. There’s almost no work because of the war.”

He started painting and drawing in a serious way when he was in the eighth-grade in 2001. He did a sketch of a boy on an A4-sized paper sheet and showed it to his parents.

“They said, ‘You are an artist, go on. They started supporting me by buying me materials and then it started,” Subay said, adding that he wants friends, passersby and anyone elseo who wants to join to take part in his street art.

“Art gives hope and expresses the situation people are living,” he said. “It is the voice of people. In war, all voices are voices of hatred and destruction. What we do is show that there are other voices people can listen to. In times of war, even the smallest voices may save lives. Yemenis are in need of every voice in the world to push for stopping the war. The worst thing in war is when hope is lost. I personally also paint to protect myself from becoming hopeless.”

Part of the preparations for my participation of an exhibition held by #hrffb, Berlin. 14-24 September 2021.