A Yemeni artist sprays graffiti on a wall in front of the central bank in protest at the worsening economic situation in the country.PHOTO: EUROPEAN PRESSPHOTO AGENCY 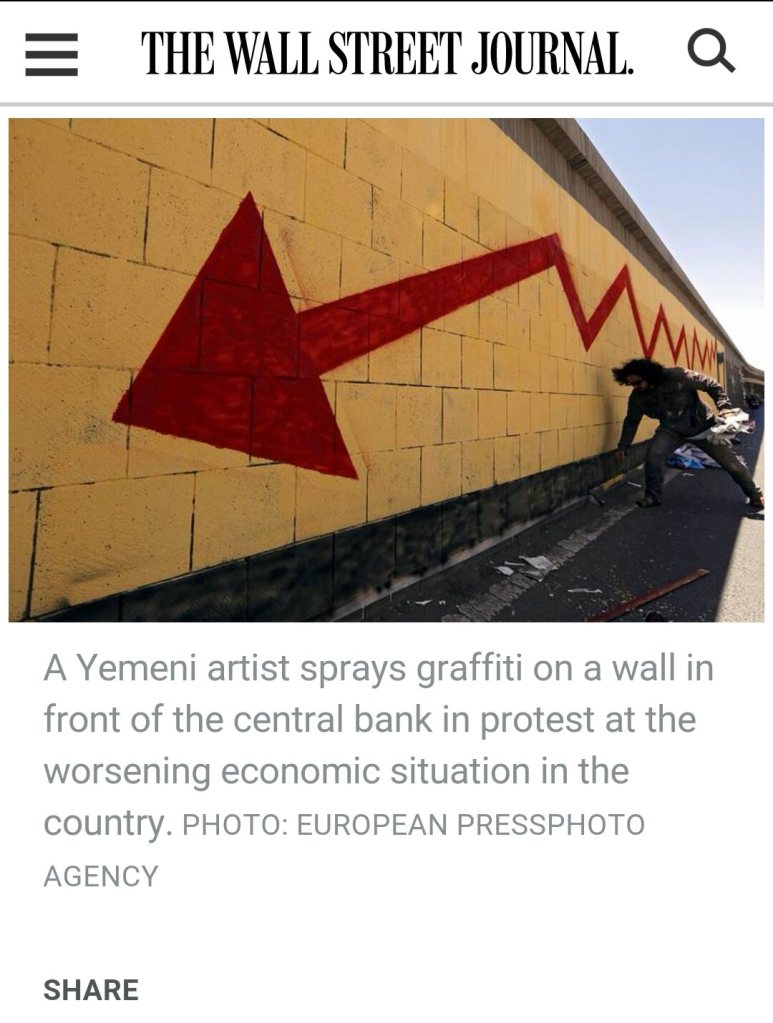 Something peculiar is afoot in Yemen: the usually arcane topics of monetary policy and central banking have become part of everyday chatter, even street art.

Since a Saudi Arabian-led coalition began airstrikes in March 2015 in a bid to oust Houthi rebels from power, some 6,500 people have been killed, and those official numbers are likely far too low.

But what is less reported is how the war has also devastated Yemen’s economy. Most of the country’s exports came from oil and gas, and those industries are simply not functioning.

Last month, a mural appeared on a wall in front of the country’s central bank – seen as a rare neutral and stable institution in Yemen’s fractious conflict. The jagged red line reflected the wild fluctuations of the faltering Yemeni rial.

The artist, Murad Subay, called his work “The Saw”, a reflection of how the economic situation is sawing his country apart. He was inspired to take out his brushes by headlines that the central bank is the last hope for his country’s faltering economy.

“People are devastated because of the currency fluctuation,” Subay told IRIN by email. Prices have shot up while wages have stagnated, he said, and “many people can’t afford to live under this economic situation; they can’t afford to purchase food and basic services”.

For the past few months, commentators have been warning that Yemen’s central bank is in serious trouble.

It is perhaps surprising it has survived this long – after all the country has been ravaged by a war that has become too complex to fit into two sides: it includes multiple local conflicts and allegiances that are tough to untangle.

Related: Why does no one care about Yemen?

The central bank sets official exchange rates for imports of flour and grain. It had also, until recently anyway, managed to keep paying government employees like soldiers, teachers, and doctors – no matter their loyalty or location.

But how long it can prop up a country on the brink of complete economic meltdown is unclear.

Marwa al-Nasaa, resident representative for the International Monetary Fund in Yemen, told IRIN that “the Yemeni economy and rial are obviously in dire straits”.

“After 15 months of intense conflict, the central bank’s reserves, understandably, are running low,” she explained in an email. If foreign reserves become more depleted and the bank can’t prevent the rial from falling further, “it would hit the average Yemeni hard, and the very poor would likely suffer most”.

While there are unconfirmed reports that the Houthis have raided the bank’s reserves, under the hand of respected governor Mohammed Bin Humam, it has done it’s best to keep the currency stable, altering the official exchange rate to combat black market trading.

“Over the last 15 months, by all indications, the central bank tried to deal as neutrally as possible with a very difficult economic, social, and security situation in Yemen,” said al-Nasaa.

“But its ability to maintain foreign exchange support for the most basic imports, service sovereign debt obligations, and pay public sector wages is becoming more and more circumscribed.”

Back on the ground

While all this sounds rather academic, it’s not.

Hisham al-Omeisy, an analyst based in Sana’a, pointed out out that what the bank does – or doesn’t do – has a direct impact on everyday life and everyone knows it.

“It affects us directly with pricing, with getting gas… A lot of people don’t have money to begin with,” he explained to IRIN, so any shift in prices can feel drastic.

One impact of the crisis in the banking system has meant that traders seeking to import goods into Yemen – including food – have been unable to acquire credit.

That means food imports are down, and prices are up. In the capital, a 50-kg sack of flour goes for 7,500 rial, compared to 5000 rial a few months ago. In areas like Taiz, prices are significantly higher still.

And it’s hard to buy pricey food without a regular salary.

As of September 2015, the General Union for Yemeni Workers’ Syndicates estimated that three million people had lost their jobs due to the war.Those who still have employment, like the always-in-demand taxi drivers of Sana’a, find it hard to keep going when fuel is in short supply and expensive.

“It’s really hard to make money for your children to survive while you [also] need to feed your car with fuel to keep working,” said cab driver Ahmed Shamsan, a father of three.

Is this Palestinian refugee camp Syria’s next Yarmouk?

The situation is deteriorating fast. Earlier this month, the bank reportedly stopped paying some government salaries, at least for the time being.

And it could yet get worse.

“If basic imports such as grains, fuels, medicines, and fuel are constrained further, this would quickly spill over into the daily lives of people that are on the edge already,” warned al-Nasaa.

Among the sectors hit hardest by the economic crisis is health, an area that was already in a bad way.

“You see that – slowly – programmes like vaccinations and things that should work are no longer functioning because [clinics and hospitals] are just running out of supplies,” she told IRIN.

If public doctors and nurses are unpaid it would represent a really dangerous situation, Kleijer said, as the majority of private clinics have already shuttered and locals are depending solely on publicly-funded healthcare.

“Our biggest concern is the health system is going backwards rapidly. We are at the end of our [tether],” Kleijer added.

Back in 2012, Saudi Arabia stepped in to help Yemen’s economy with a $1 billion deposit in the bank.

But as a belligerent in the conflict, further financial support now seems an unlikely prospect, although there are reports that they have demanded the bank move to Riyadh or Aden, which had been a stronghold for Saudi-aligned forces.

Instead, she said, “it could support a programme designed by the Yemeni authorities, where the authorities would be able to assume and implement programme commitments”.

The IMF does offer concessional lending to low-income countries with urgent needs.

“The IMF has closely engaged with Yemen in the past,” she said, “and it certainly stands ready to help again once conditions would allow [it] to do so”.

Everyone, and that includes al-Nasaa, says the best way to shore up Yemen’s economy is peace.

“The best that could happen is that the conflict parties find a way to a durable peace agreement, and all stakeholders could work together to stabilise and reconstruct Yemen,” she said.

But talks in Kuwait appear to be headed nowhere quickly.

Subay, the muralist, is concerned for his country, even if the bank gets help.

“I don’t think that this crisis can be solved by some kind of resolution on paper. No economic situation improves during wartime… the war needs to stop first.”

Yemenis have suffered both, destruction, oppression, hunger and thirst, and above it all, they are now going through even harder times with the almost economy collapse.

My mural “The Saw”, in the eighth activity of “Ruins” campaign around “The Economy Collapse”. It was painted on Al-sadaqah bridge, Tahrir street, Sana’a, on June 9, 2016. The “Central Bank of Yemen” appears in the picture.